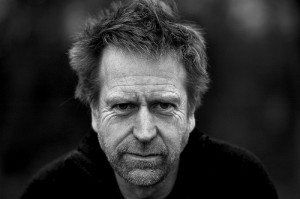 I was born in the dull vacuum of suburban Manchester which gave me the impetus to leave and look over the horizon. I went to Reading University, because it was made of bricks and looked like a ‘seat of learning’. My world suddenly became oh-so much bigger. I was hungry and inquisitive moving from department to department. I discovered I could swap universities and went to Gottingen, in dull flat Germany to do printmaking. Then Syracuse, in cold snowy New York to do sculpture. I graduated making ‘short wobbly’ films.

I made Mark 44 torpedoes, wired Generators, poured concrete, planted the Queen Mothers flower beds and wired up explosives down a Nickel Mine.

I was a tax coding clerk,a receptionist,a cycle courier, a filing clerk, a museum warden and an Ambulance driver.

I put the food on planes, sold finance, moved Pianos, painted houses, drove a mobile Library and chopped wood on an Aboriginal reserve.

I put the rivets in Boeing wings, and plumbed Terence Conrans radiators.

I love travelling, just going along, being no-one,going no-where. I walked across Japan, across Taiwan,the Malay peninsula and New Guinea. I cycled the border of Germany because I’d seen the film ‘Kings of the Road’.

I have always loved taking photographs, which is like‘trying to fit the world into a six by nine box’. Just before I went to India I went to see my tutor, the erudite Harry Redman who said “remember, you are not taking pictures, you are capturing light, picturing light, not things”  Weeks later on a dull day outside the Taj Mahal I remembered the words, and put my camera back in its bag.

I did a masters at the Slade school of Art making environments and installations,I loved the freedom to experiment and play and worked hard for two frantic years. Followed by a 9 month Fellowship at Cheltenham school of Art when ’I discovered the biscuit tin’.

Making small wobbly figures out of tin and wire led to residencies in schools, hospitals, colleges, factories, and museums. Little tin fellows were used in adverts, on book covers, and featured on T.V.

I sit at a table, with a few tools, bend, beat and solder, drink tea and imagine whether or not they own a caravan or are members of a Book Club or own a Dog called Derek. The world becomes very small.

Making folk out of biscuit tins led to the ‘brave new frontier’, the world of Public Art. Putting stuff in the world that the town planners had taken out, I started by making Benches, Bollards, Railings,and Tree Grilles with ‘fiddly bits’.

Britain has a remarkable history, convoluted and complex, vibrant and desperate. Public Art tends to be in places where the old industrial world has gone and no-one quite knows what to do.

I try to make work that engenders a sense of pride, a pride that now lives on in the names of Football Teams (Luton-The Hatters or Yeovil-The Glovers), recalling the time when towns were known for what they made.

I hope that what I do makes the world a little bit more interesting.